Hurricane Matthew - Winds and rain lash Haiti and the US

Hurricane Matthew first made landfall over Haiti on 4 October, before hitting Cuba, the Bahamas and the US. It’s estimated to have caused damages of over US$10.5 billion, making it the costliest storm since Hurricane Sandy in 2012, and killed as many as 1,600 people, making it the deadliest since Hurricane Stan in 2005. Fatalities were reported in Columbia, the Dominican Republic, St Vincent and the Grenadines, with the US and Haiti seeing the highest death tolls.

In a video (see www.airmedandrescue.com/story/1618), Mission Aviation Fellowship (MAF), which has been working in Haiti since 1986, detailed the vital role of aircraft in disaster relief. Vaugh Woodward, a member of MAF’s international disaster response team, explained that the damage caused to ground infrastructure in Haiti means that aircraft are the only way for aid to be brought in to some of the damaged areas.

completed 71 disaster flights, carried 233 passengers, and delivered 5,378 kg (11,856 lb) of cargo. By 18 October, MAF had deployed four planes, including a Kodiak that flew from Idaho, US, carrying a satellite communications system that was set up in Dame Marie. The Fellowship noted that 145,000 homes had been destroyed, and 750,000 people were in need of food.

In response to a request from the Haitian Government, the US Southern Command (Southcom) supported the US State Department and the US Agency for International Development in delivering and co-ordinating humanitarian relief to Haiti. An advance team, led by the US Agency for International Development’s Office for Foreign Disaster Assistance, was sent to set up operations in Port-au-Prince. It arrived aboard CH-53E Super Stallion, CH-47 Chinook and UH-60L Black Hawk helicopters before additional personnel and equipment were transported via helicopters and a C-130 Hercules cargo aircraft.

The Airbus’s Foundation and France-based Action Against Hunger lent the services of an Airbus A330 test aircraft to assist with the transportation of 20 tonnes of humanitarian aid to Haiti. The supplies were flown to Port-Au-Prince to be distributed by various NGOs.

Another organisation involved was Global Medic which, in partnership with Adra Haiti and the World Food Program, distributed aid to hard-hit and difficult to reach communities via helicopter.

Shortly after the disaster hit the island, rapid-response humanitarian relief organisation Airlink reached out to its aviation partners searching for helicopters. GE Capital Aviation Services (GECAS) connected Airlink with Milestone Aviation Group, the helicopter leasing company that GECAS purchased in 2015. Bell Helicopter then stepped up to provide a Bell 412EP and a Bell 429 with crew. Airlink scheduled a second charter flight to Haiti with 175,000 pounds of supplies for Bell’s team to distribute to remote areas of the island.

Stan Brock and a second RAM team joined on 16 October. The two teams later reported having used a C206 and a Caravan plane to successfully airdrop 24,804 and delivered 30,310 high-nutrition meals made by Feeding Children Everywhere, Deliver the Difference, and Feed My Starving Children.

Forces also flew in from south of the Equator. A Brazilian Air Force Boeing 767 made flights from Brasilia on 14 and 17 October, carrying Army and Navy personnel and aid supplies to Haiti (see www.airmedandrescue.com/video/1622). The Corsair Squadron was following up on a flight made in July to assist United Nations Stabilization Mission in Haiti (MINUSTAH). 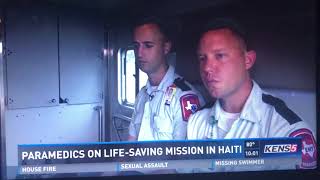 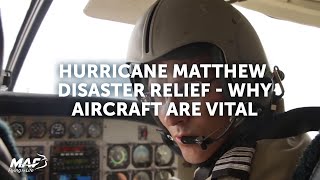 Hurricane Matthew - Winds and rain lash Haiti and the US 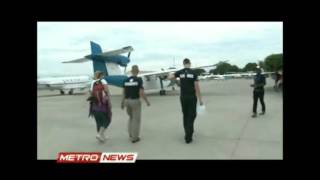